When It Comes to Perfect Calf Muscles, More And More Bodybuilders Seek The Help of A Medical Expert to Achieve Desired Results.

For years, bodybuilders who sought to improve the definition of their calves-or gastrocs as they’re called-did it by tearing down the muscle groups in the lower leg through intensive workouts, then letting the tissue rebuild to improve mass and definition. There was nothing new about this methodology; it was considered the “accepted” routine for developing the type of calves that would put them at the top of their game. But, things have now changed when it comes to getting the perfectly shaped lower leg.

Today, a new generation of both professional bodybuilders and non-competing muscle aficionados are seeking help from modern medicine to help them with the cut many of them can’t seem to achieve . . . even after years of intensive training and doing it by the book. And many of them are coming from around the world to see Dr. Ryan Stanton, a prominent Beverly Hills plastic surgeon and leading expert in what is known as Calf Implant Augmentation. Speaking from his Beverly Hills office, Dr. Stanton said, “It’s not that these people want to short-cut the hard work involved in getting bulkier, more shapely legs. It’s just that in some people, genetics plays a big part. The fact is, many of these folks work out much harder than most to get great calves. But, no matter how much they work out, they’ll simply never get the mass or cut that others attain.”

Many people don’t realize that the two muscle groups that make up the lower leg region can’t always be crafted into the desired shape by merely workouts alone. Even with years of training, some calves simply won’t be where the person wants them to be. So, what’s a bodybuilder to do? The answer lies in calf augmentation-using calf implants-a surgical procedure to improve the overall ‘look’ of the lower leg. Today, many of even the most traditional bodybuilders are getting calf implants to help them get what training has denied them for years.

Not All Calves Are Created Equal-

Calf augmentation is performed for both aesthetic and reconstructive reasons. From an aesthetic perspective, particularly bodybuilding, much of the emphasis on this region is due to both fashion and lifestyle changes in Western Society. Simply said, in western cultures it’s considered a physical attribute to have attractive, well-defined legs . . . even if you’re not a bodybuilder. Because of this, demand for calf implants among both male and female athletes who desire additional definition and the right proportions in the calf area, is rapidly increasing.

So, when it comes to calf anatomy, what are considered good anatomical proportions? And, how is this determined?

Lower leg, anatomical proportions considered to be aesthetically pleasing were calculated by Dr. R. M. Ricketts who determined these dimensions to be mathematical ratios of X, Y, Z (width, height, depth), as well as angular proportions of the human body, to define what is termed the “golden proportion” (1:1.618). For calves, the most aesthetically pleasing dimension is merely a matter of measurement. In simple terms, if one measures the distance from the knee to the widest inside point of the calf muscle, then multiples this distance by 1.6, the entire length of the gastrocnemius muscle (calf muscle) must be at least 1.6 times the length of this previous value, to create proper calf symmetry. Circumference varies, according to length of entire muscle, but generally it has been found to be approximately 12-13 inches in size for most people. 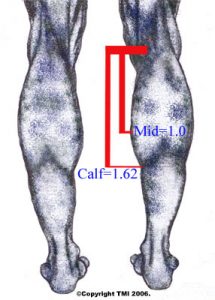 Where Calf Implants Are Used To Achieve Bodybuilding Goals-

Dr. Stanton detailed that there are only two methods for reshaping the lower leg region-specifically the Gastrocnemius and Soleus muscles that make up what is commonly termed the calf. One involves placing the calf implant under/between the two muscles that compose the calf region (submuscular technique); the other method places the implant just under the dermis, within the fascia of the muscle (subfascial technique). Each method of calf augmentation has its benefits . . . and drawbacks.

From a bodybuilders perspective, the best result is one where there is no visible sign of the implant edge—so it must be placed deep enough to assure that it will be hidden by surrounding tissue—but also not too deep, or the best definition of the muscular shape will not be enhanced as much as it could.

There are really two ways to go. The first choice is subfascially, is a less surgically intensive procedure. The second method, sub-muscularly, involves placing the implant between the flat fibrous sheets of connective tissue that typically attach the muscles that make up the gastrocnemius and soleus muscles to the bone (subaponeurotically). “Usually, calf implants are placed subfascially,” Dr. Stanton said, “however, in many cases the best results are obtained by placing the implant in the submuscular plane—deeply within the muscle. It all depends on the individual.”

As it turns out, subfascial placement of the calf implant is generally performed more often because the procedure is less dissection-intensive, and results in generally faster recovery times with patients reporting less pain. “The thing to watch for is implant movement (drift or rotation), or being able to feel the perimeter edges of the implant because they are usually harder than the nearby muscle and not enough tissue covers the implant itself,” Dr. Stanton explained. “As well, sometimes the desired effect isn’t aesthetically as pleasing as the submuscular method because the implant itself sometimes can define the final shape of the calf region, rather than the muscle tissue. If you’ve done as many of these as I have, you can almost always get it right, without any problems.”

Submuscular (subaponeurotically) placement is considered a more difficult procedure as the operation delves deeply into tissues. As well, this method of calf augmentation generally requires much more recovery time and involves more discomfort until the deep tissue trauma begins to heal. There is also a chance for more damage to nerves and vascular tissue, but this is infrequent if the surgery is performed by someone with vast experience, like Dr. Stanton. Some say, however, that the results are better because the implant is placed more securely and accurately within the gastrocnemius and soleus muscles (within deeper fascia tissues), allowing for more aesthetic placement of the implant. It’s also been observed that submuscular implantation can result in a more natural calf shape and feel because the actual muscles of the calf cover the implant completely. “It all depends on what you begin with,” Dr. Stanton noted.

What Are Your Choices For Shape and Material?

After making the choice to proceed with calf augmentation, the next question is, “what type of implant and style is best for me?” Again, there are a few choices. Dr. Stanton said, “Both silicone-gel implants and solid silicone implants are available for calf implants. Silicone-gel calf implants sometimes have problems with capsular contracture, whereby the capsule, or the external implant material can harden. Fortunately, this is a rarely happens and it is much more frequent with breast implants rather than calf implants.” The Beverly Hills surgeon went on to say that silicone-gel filled calf implants are usually symmetrical cigar-shaped sizes with some also available in anatomical sizes (asymmetrical), where the upper portion of the implant is usually larger in volume than the lower section. Most silicone-gel implants have a shell that is composed of silicone elastomers (medically approved grade), and a volumetric gel that is made of cohesive silicone, so it won’t migrate to other areas if the implant is somehow ruptured.

Anatomical implants (silicone-gel) are often used for bodybuilders who desire a more dramatic look for enhancement of the medial (inside calf) point, or peak. This added volume could give the body builder the cut they desire when they can’t achieve additional mass by weight training alone. Unlike bodybuilding clientele, where mass and definition are paramount to success, most consumers are fitted with symmetrical calf implants because the narrower profile permits a more natural curve in proportion to the upper thigh.

Are The Results As Good As Touted?

In almost every case, with either method (submuscular or subfascial) of calf augmentation, patients were able to return to normal activities within a few weeks. Body builders sometimes required slightly more time. As well, calf augmentation reports one of the highest levels of satisfaction among patients, with less than four percent (4%) of patients reporting any complications or infection. “When done right, calf implants can leave a bodybuilder with the added definition they’ve always sought,” Dr. Stanton stated. “And, it’s also been determined that calf implant augmentation does not in any way impair the normal function of the calf muscle or calf, and in fact, offers a level of improved self-esteem in those who have had the surgery performed. All one needs to do is to see the before and after photos on my website, www.bodyimplants.com.”