Hip Implants are almost always done for cosmetic reasons. Women who have complained about “having the hips of a boy”, or deem that they don’t have the so-called hourglass figure that accentuates other physical attributes, now have the ability to gain more curvature.

Buttock Implants will help those who wish to enhance the appearance, size and definition of gluteal muscles in the buttock area. Women who desire a Jennifer Lopez “look” can attain this through the use of butt implants, or Stem Cell Fat Muscle Augmentation, for those who’d prefer to use their own stem cells and tissue, without having a silicone implant inserted. In either instance, the results are wonderful and you can easily add more body curvature to those areas where they previously were deficient. Some surgeons perform buttock lifts in conjunction with the butt implant procedure.

Pectoral Implants commonly referred to as breast implants for men, male chest implants, or pectoral implants, this procedure has seen a dramatic rise in demand the last year. Pec implants will enhance the appearance, size and muscular definition of pectoral muscles in men and is also frequently used to correct pre-existing congenital and physical defects.

Calf Implants is a very popular procedure, which will create cosmetic fullness in the lower leg and can help those men and women who, even after extensive muscular development, can’t achieve the calf muscle toning they desire. Calf implants are best suited for lower leg sculpting, and also can correct muscle imbalance as a result of both physical and congenital defects (“skinny/chicken” legs, bowleggedness, clubfoot, disproportionate calf development).

Bicep Implants will create muscular definition and increased mass/fullness in the upper arm area. This procedure is specifically useful for those men and women who, even after extensive muscular conditioning, or injury can’t achieve the upper arm toning they desire.

Women who desire better definition, size or have asymmetry (congenital) can usually rely on this procedure to give them consistently good results. Women who’ve had multiple childbirths and have breast-fed can also employ mammoplasty to re-volume the breast—eliminating breast sagging after feeding stops (postpartum) and milk production ceases. Size increases in bust can typically result in one or more bra sizes.

Body implants are used in muscular enhancement employing silicone implants or fat transfer, and most commonly include butt implants, calf implants, and pec implants. Even further, there are alternatives to solid silicone implants including new, less invasive surgical methods that employ stem cell fat augmentation. Traditionally, muscle implants have been used to surgically build-out a deficient portion of the musculature of one’s anatomy by improving the size, shape, or definition of existing muscle groups caused by congenital defect, trauma, or for personal desire to better one’s self-esteem and confidence. Years ago, buttock, calf and pec implants were considered unique, as were these types of surgical procedures. But today, as greater numbers of surgeons perform these three common body implant procedures, what was once considered unique surgery is now considered relatively “generic” in nature—because butt implants, calf implants, and pec implants have become fairly common. Implant procedures using body implants have expanded to include new areas in cosmetic and reconstructive surgeries . . . a new generation of “unique” implants that include bicep implants, abdominal implants, deltoid implants, and cosmetic hip implants.

Body implants are utilized for purely cosmetic/aesthetic reasons and for functional issues. In the latter application, patients may need calf implants, pec implants, deltoid implants and bicep/tricep implants to address genetic or injury-related problems to deal with debilitating congenital or reconstructive issues. Aesthetic usage, on the other hand, may occur when there are issues with self-esteem, personal preference, or confidence. In each application, both generic (calf implants, pec implants, buttock implants) implants and unique (deltoid implants, cosmetic hip implants, thigh implants, abdominal implants, bicep/tricep implants) implants have vastly improved the lives of affected individuals.

More traditional and reconstructive in nature, functional applications for surgical intervention in affected areas include:

Vehicular mishaps and injuries resulting in abnormal physical appearance, usually unilaterally (affecting only one side of muscle groups);

Neoplasms and cancer, specifically breast cancer in women where surgical excision of lesions and/or massive tissue removal is mandated;

Implant surgery for functional problems can mitigate the abnormal appearance of any congenital and/or injury disorders. Pec implants may be appropriate for physical injuries and congenital disorders such as Marfan’s Syndrome, Pectus Canaritum, Pectus Recurvatum, Pectus Excavatum and Poland Syndrome. Calf implants are useful in severely torn Achilles tendon injuries, as well as genetic disorders such as polio, Spina Bifida, Clubfoot. Deltoid implants negate the effects of physical injury and congenital deformities such as Sprengel’s Deformity (Scapular Hypoplasia). Breast implants, or breast augmentation (mammoplasty) are effective in rebuilding the self-esteem and outward appearance of a woman (or man) who has sustained breast cancer. Even bicep implants and tricep implants can correct or partially repair anatomical form relating to trauma injuries.

Hence, implant surgery for functional reasons represents a relatively safe solution to many of these aforementioned problems—provided one finds and employs a surgeon who not only has experience in understanding the malady (book smart), but one who has performed numerous surgical procedures to correct such medical issues.

Aesthetic muscle augmentation serves most primarily, the purpose of benefiting the individual, from a self-image perspective. Aesthetic use of muscle implants was pioneered by leading cosmetic and reconstructive surgeons and has dramatically progressed into new areas of aesthetic/cosmetic utilization, primarily to enhance aesthetic form in some very unique and beneficial ways. This increase has been driven by individual wants, and expectations, some of which have foundations in our societal/biological evolution regarding individual preferences toward body appearance. This is a major factor behind the desire for aesthetic implant surgery, and it is chiefly responsible for the increase in butt implants, breast implants, cosmetic hip augmentation and other cosmetic surgical implants. Additional aesthetic use can include tricep implants, bicep implants, abdominal implants, deltoid implants, thigh and arm implants as well as others. In all the prior-stated applications, there is direct correlation affecting both patient self-esteem and confidence.

Aesthetic motivations for implants vary, but there is now significant scientific evidence that human evolution has “pre-wired” all of us for expectations about what is desired in the area of preferred body types to some degree—subliminal wants about how men and women perceive each other, SPECIFICALLY when it comes to appearance and anatomical physical attraction. Oftentimes, behavioral patterns that people exhibit to one another are based on evolutionary biology. The essence of this instinct resides in our brain’s Limbic System—a small grouping of deep internal brain structures that interact and influence behavioral traits. Within this system of structures, one in particular—the Amygdala (pronounced ah-mig-da-la)—seems to contribute largely to our subliminal expectations by processing visual and, to some degree, olfactory (smell) sensory data. The bottom line is that men and women exhibit different behavior when seeking a desirable mate, much of it based on interpretation of aesthetic appeal. These determinates are embedded in each person’s limbic system and there are few, if any, firmly established criteria. It mostly comes down to reproduction and continuation of the species. It will suffice to say that women, like men, want to “look good” to each other . . . hence they seek and demonstrate a specific outward physical appearance. This is a perfectly normal self-expectation and both men and women can usually achieve and/or enhance these aspects of their anatomy through implant surgery, now, at a reasonable cost. To find our more, see our section on Body Implants and Physical Attraction.

Things You Should Know About Implant Surgery

How much does Body Implant surgery cost and what is included?

Body Implant surgery costs vary depending on the implant procedure being performed and the length of the surgery.  Visit our Costs & Financing page for more information.  The price for procedures listed are a realistic range of costs and include consultation, surgery, and post-operative follow-up.

How can Body Implants correct physical appearance problems and enhance my life?

Body implants (Hip, Breast, Calf, Pec, Bicep, Tricep and Buttock Implants) are used in surgical procedures to enhance, reshape, or better define the outward appearance of the musculature/definition of the body. In many instances body implants will provide the desired body contour symmetry specifically when muscular development was affected because of a genetic birth defect, or serious injury. Other common applications include those individuals that may simply feel unattractive, or wish to enhance their body contours, resulting in a more aesthetic appearance.

It generally depends on the type and extent of the procedure, but each procedure usually takes between one to two hours.

How long will it be before I can expect a final result?

This varies with the type of operation being performed. It also depends on the individual. Some people bruise easily, while others don’t. Generally there will be swelling and some bruising after surgery. Both will usually disappear over a week or two. The final optimal result can usually be appreciated a few months after surgery.

Can I finance my surgery?

For your convenience, we accept VISA, Master Card, Discover and American Express. Our office can give you all the details, either before or at your consultation.

What tests are required before my surgery?

All patients undergoing surgery will require basic lab tests as well as a pregnancy test for women. Your surgeon will advise you accordingly during your consultation.

How soon can I get back to work?

It depends greatly on the specific procedure, but on average most patients are back to work within 7 to 14 days. If complications arise, additional time away from work may be required.

Will insurance cover the cost of my surgery?

Not usually because body implants are considered elective procedures and most insurance plans don’t cover it. But there are exceptions. Some functional surgical procedures may be covered by health insurance, in part or in full, depending upon your health insurance policy and the procedure you are having performed.

Before & After Photo Gallery

Finally, it is important that you realize and understand that the results displayed in the before and after photos are SPECIFIC to each patient who has had a surgical procedure performed and that the results viewed in the before and after pictures CANNOT be a measure or guarantee to the viewer that they will achieve the same results, as all patients are different in their surgical healing and recovery processes. 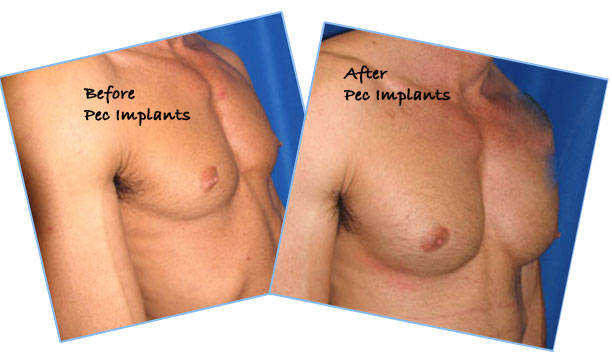 Mention this website, Bodyimplants.com, and receive a FREE Consultation!